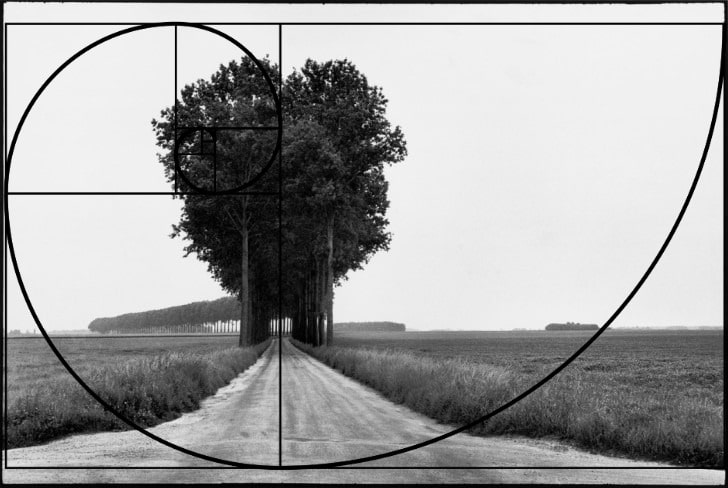 The Golden Ratio and Fibonacci Sequence in Art

There have always been strong ties between nature and art, particularly in the vast, sweeping landscapes that have inspired some of the most important paintings and artists from Monet to the music of Wagner. Nature is all around us, and as such, an inextricable part of our being. To not be shaped at least in part in nature is to have never stepped out of our front doors. Still, some are more acutely influenced by the esoteric and 'sacred' geometrical patterns that appear in nature - these ancient patterns that have influenced some of the most important artistic creations of our times.

Ratios and proportions have been present in art almost since time immemorial. Mathematics has that magic quality of trascending genre - beyond just numbers, they represent shapes and aesthetically pleasing quanities - or even more significantly as ideas - most perfectly represented - or at least memorably so - in Leonardo da Vinci's Vitruvian Man.

In this diagram, where Leonardo da Vinci illustratrates the proportion of the male body, we can see the anatomical scale as signified by the exactitudes of the manner a body can fit into a series of shapes. In further notes of the Italian polymath, his scrupulous and obsessive studies of human anatomy lean further on these ancient mathematical ideas.

Here, mathematics no longer represents numbers, but like 'logic' that would come largely from Greek study, these mathematical formulations become philosophical representations as well as tried-and-tested ideas that occur both physically and naturally all throughout our world. The exact history of each is paramount in understand their uses. 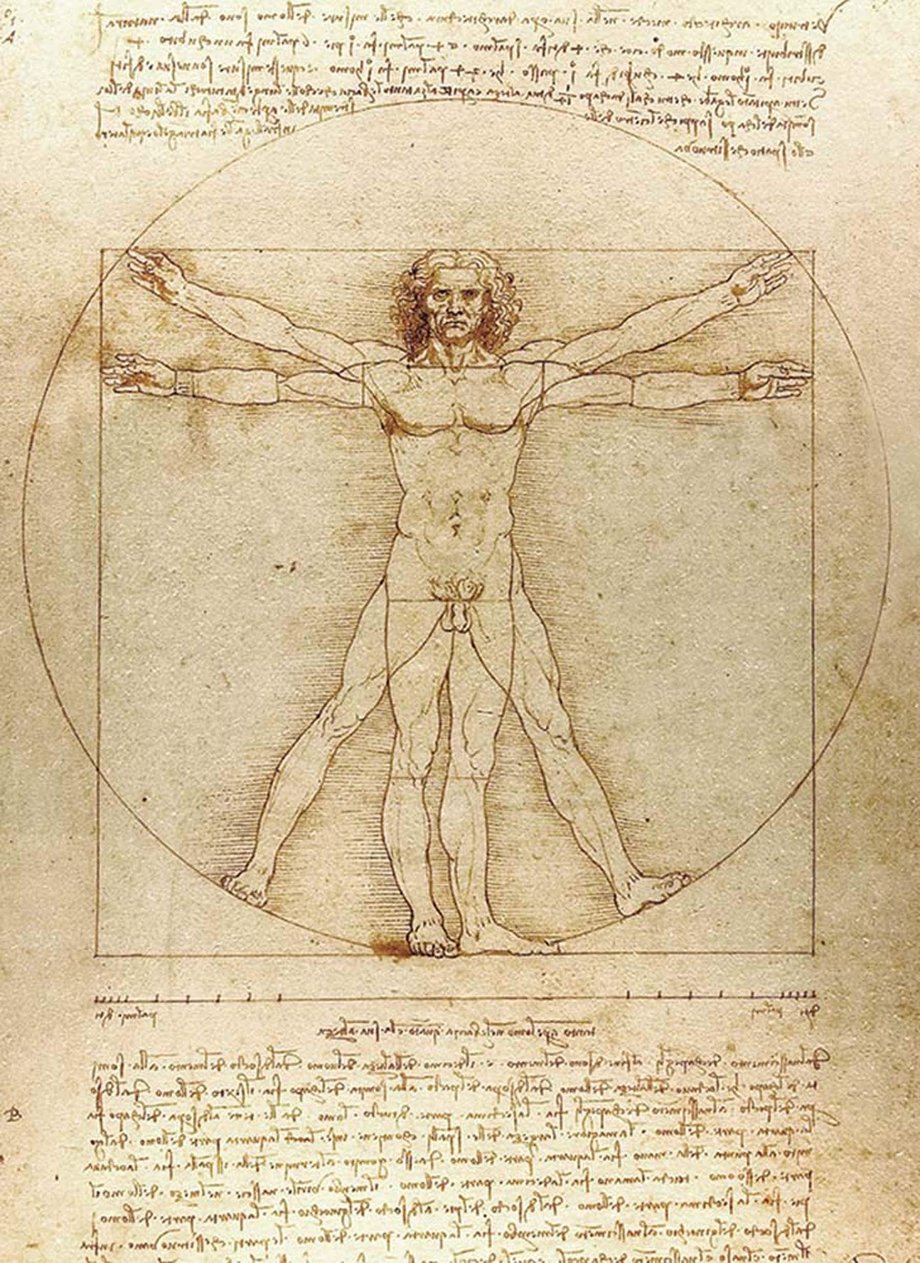 An Italian mathematician from the late 11th century, Fibonacci was credited with bringing the Arabic numerical system to Europe and very quickly his eponymous sequence, the combination of numbers that graduated from the sum of its previous two numbers (for example 1, 1, 2, 3, 5, 8, 13, 21, 34 etc). DUring the Italian Renaissance, the idea in particular allowed the more visually inclined to envisage the numerical sequence as a pattern somewhat resembling a shell - something that equated to a highly aesthetially pleasing proportion.

Its shell-like shape has wonderously spread in many naturally ocurring phenomena and as such, been adopted into many famous artistic pieces, perhaps most so in the Mona Lisa. Highly connected with the Golden Ratio, also known as the Divine Ratio, it can be witnessed in flowers, the human face, the gorgeous geomtery of the flowering artichoke and ratio of male and female honeybees present in their family tree (ie how many female and males are present in the ancestry of one particular bee). In many ways, it seems to defy explanation and has thus taken on the 'rivine' moniker many refer to it as.

It didn't take long for artists, especially those so learned in the multi-discplinary approach that classical and Renaissance art heralded at the time, to notice that this principle, if as pleasingas it is in all other aspects of life, should as feature in their paintings too. Adopting this principle with vigaour, it became de jour for artists of the time to incproporate this mathematical principle into their artistic renderings and ideas from the era.

Architects and musicians use it in their own creations and scales and much like the 'golden' frequency of 432 Hz - the frequency at which audio signals most resoundingly resonate with our body - it is one more physical phenomena that inherently binds us to our natural surroudings, something that has an almost inexplicable quality that one, whilst being able to explain, cannot truly understand. It is also something that has birthed some of the most important artworks in human history. 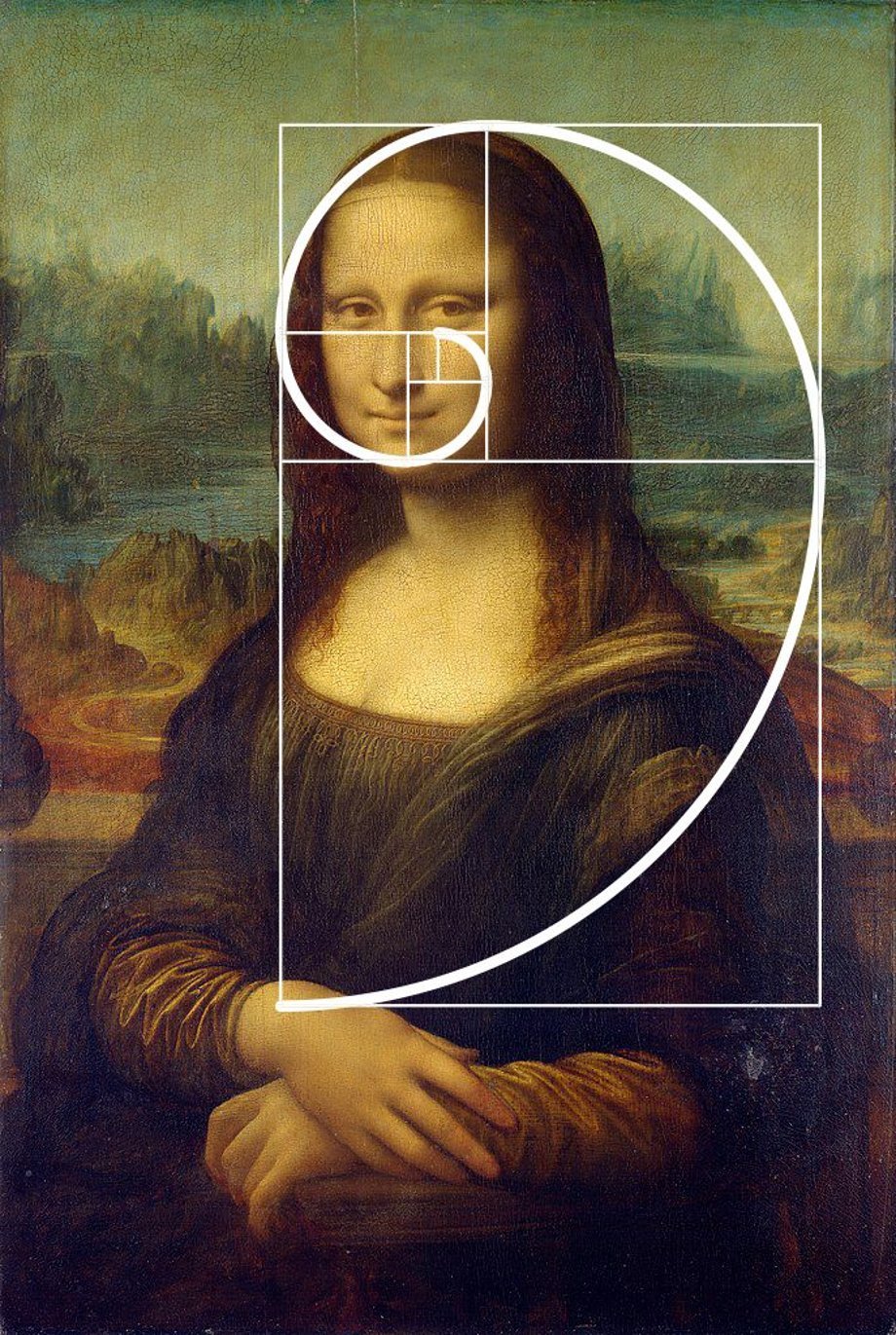 Acknowledged as the 'Rule of Thirds', the composition of the painting is thought of in threes rather than simply centered the subject, lending itself to a flow, giving life into an image, allowing it to flourish as a more organic and natural configuration that most of the time would consider as more pleasing.

Incorporation was intentional during this period, but by de facto of artistic development, the sequence and ratio had began to impregnate itself into the artistic process of those that followed, becoming as almost inherent aspect of artistic composition, both in figurative and naturalistic paintings.

As such, the Fibonacci sequence and golden ratio, as visualised centuries ago, are now as apparent in art and our perception of it as it is a naturally ocurring phenomena. What is unique about the sequence is that many artists will utilisise its aesthetic benefits intentiionally, yet other highly regarded artworks of photographs will - entirely through coincidence - realise that is can be traced onto their own piece, so much so as that it has even been observed in war photography or famous news coverage. 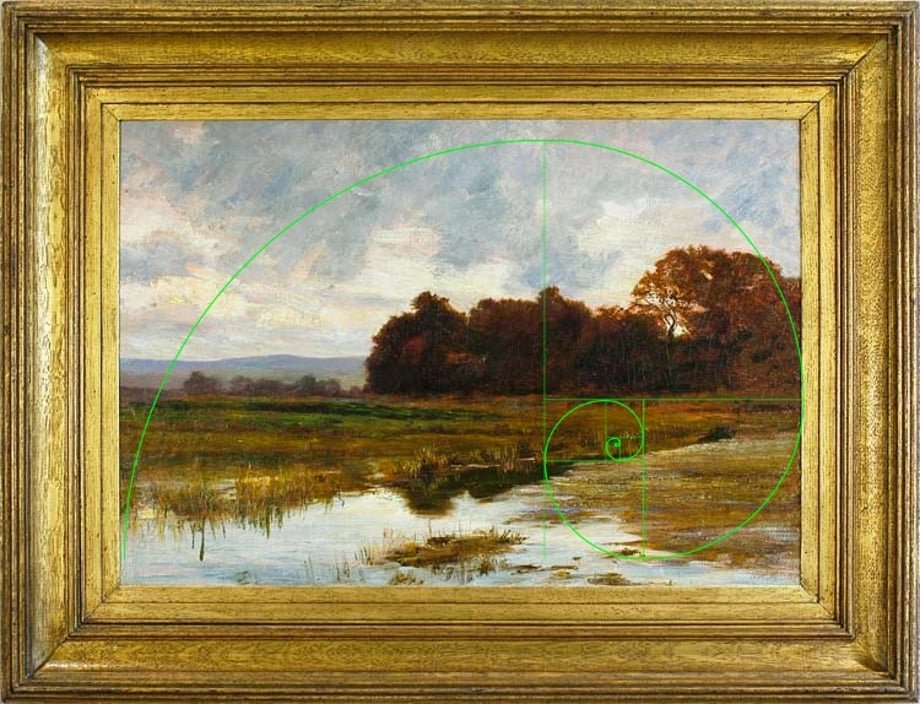 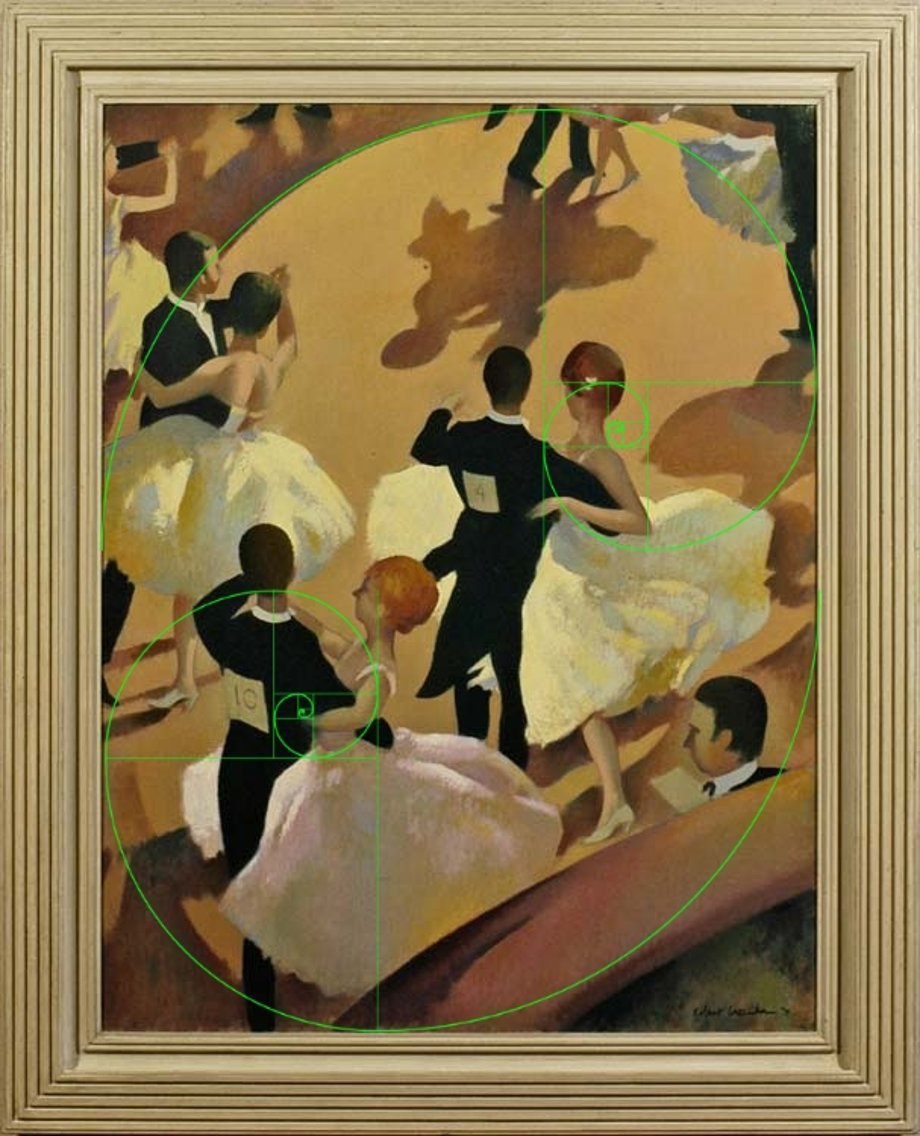 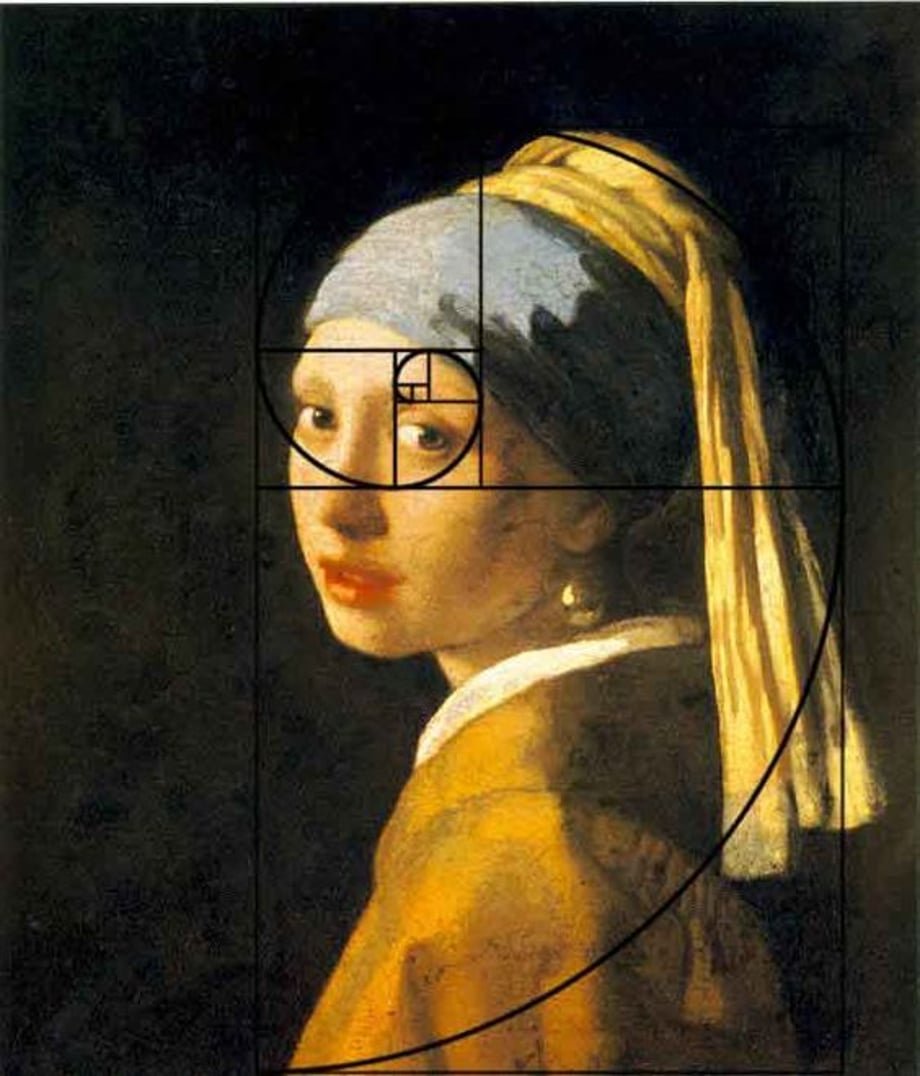