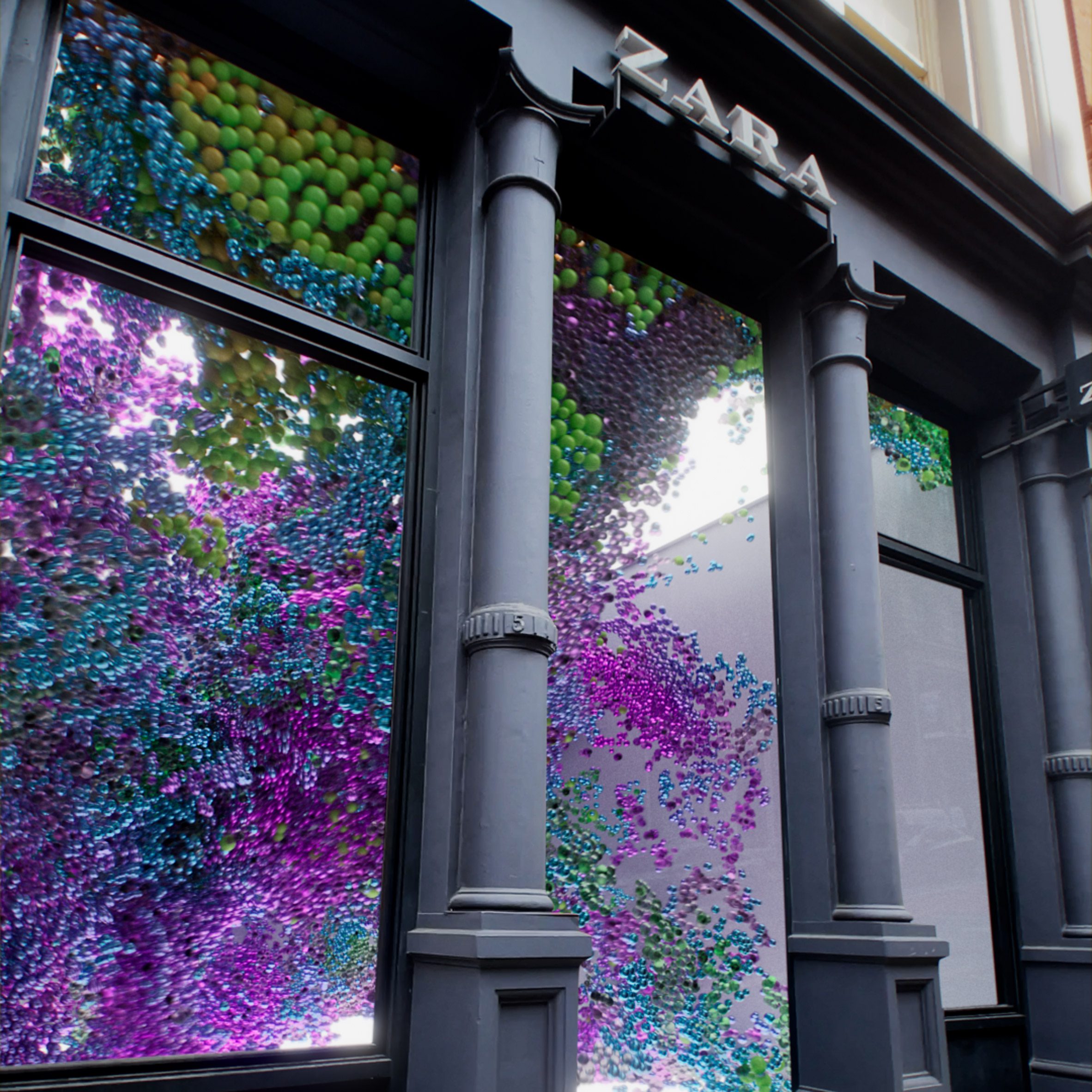 Shane Fu - Another World In Ours

Shane Fu utilises 3D and motion graphics to create small pockets of fantastical worlds within our own. Converting urban environments, walked by unnoticed thousands of times each day, into locations of digital marvel, the Wuhan-born artist is pushing boundaries in his new artistic frontier.

Digital art’s Banksy might well be Beeple, whose dedication to the craft has helped elevate the emerging movement to new planes, particularly legitimising it through his application of NFTs. Upon seeing Beeple’s work, Shane Fu began to relish the opportunities that working with 3D and 4D art afforded him. Pushing his creative limits thanks to the immense possibilities of software like Cinema 4D, Octane and Redshift.

Fu’s main focus is injecting the entirely banal with something unexpected. Whether it’s shop fronts, like his collaboration with Zara in New York, where the store appeared to be filled up with coloured balls that flow freely around the space as if they’re being blown around by a giant fan. Amassing over 17 million views on the brand’s TikTok, audience’s were bemused when they attended the site hoping to see LED screens awash with vivid graphics.

In reality, there was no such thing to be found. Fu’s works only exist digitally, a sleight of hand that, the artist understands, has left a few slightly frustrated. So much so, in fact, that owners of the sites his works are based have actually asked the artist to post with disclaimers as art-hunting pilgrims swarm the location in the hope of recording their own take on the popular works. Created by recording the location, in a sort of panning motion, Fu then edits the clips and uploads them online, fully attached with his new perception of reality. On his process, Fu says that, “I used lighting references from the location,” as a way to better mimic the natural conditions that his videos ‘exist’ in. They’re not ‘real’, but if they were, they’d look like this.

Attracted to the frameworks of a limited and closed space, Fu focuses on making things that are unbelievable, but also entirely believable. Many of his contemporaries, working with similar techniques, create pieces that seem to be so far from the realms of physics that the illusion has already been shattered. Fu’s secret is to create art that is subtly mesmerising.

In a hyper-connected world, Fu’s pieces seem like the perfect remedy. Built specifically for this audience, he’s ushering in a new era of urban art - the kind that doesn’t even exist in the street at all. Combining his keen interest in physics and maths, the artist states that, “I’m using a lot of physics elements that we recognise in real life, and subverting them to my simulated vision,” before adding, “That tricks people’s eyes into thinking it’s more than just computer graphics.”

His intention was never to fool, but to explore fully what is and isn’t possible. By continually reshaping the boundaries of digital art, Fu has caught the eye of some global brands. It’s easy to say that the only limit is imagination with art, but that’s not strictly true. However, without any real physical constraints, this is a claim we can make with certainty when looking at the potential of Fu’s digital vision and where it could potentially go.

You can see more of the artist's work in action on his Instagram.

July 11, 2022
Refik Anadol - On the Precipice of Possibility
At the vanguard of the future of art.
Edd Norval