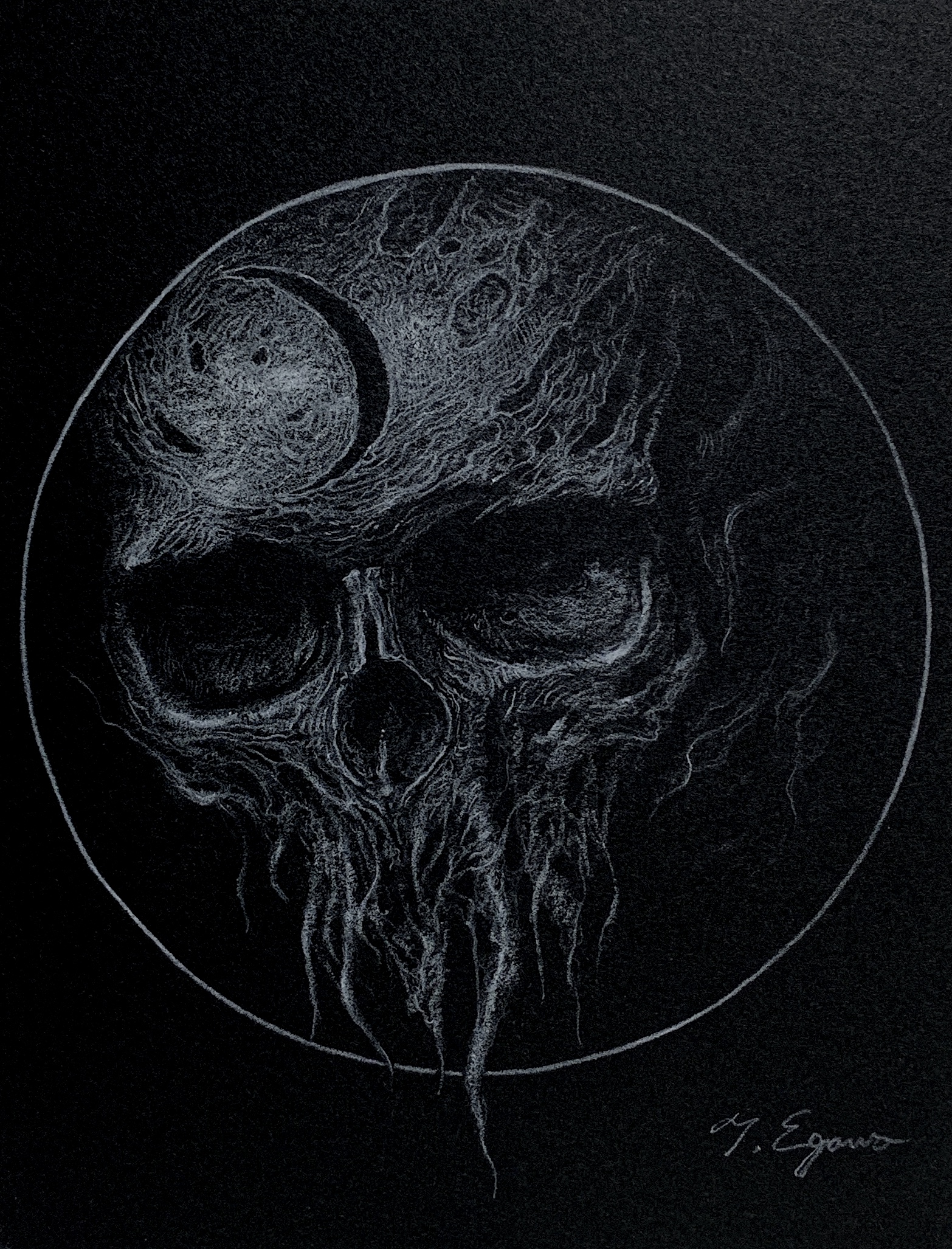 Toshihiro Egawa is a name best known in a particular corner of the musical world - metal. His artworks, most commonly utilising white pencil on black paper, have an innately dark appeal. His visceral, exquisitely detailed works are as gothic as they are morbid, as technical as they are attractive. That’s why they adorn the cover of so many records.

Metal album covers are undoubtedly full of cliches. Just like many genres, metal itself is riddled with a particular tunnel vision that ultimately holds back its development. Egawa is a rare innovator within this closed space. First and foremost, his modus operandi is to create highly detailed, gothic-inspired sketches on black paper.

In doing so, his work almost fades into the background, consumed by the darkness of its own environment, like a figure is emerging from the shadows, barely picked out by the light. Painting this type of picture, an emergent shape from its consuming environment, bestows his work with the right tone for metal bands to draw inspiration - and strength - from.

Born and raised in Osaka, Japan, Egawa’s influences of Japan in metal, whilst scarce, tends towards the extreme. Japan’s metal scene can be characterised by its tendency towards the obscure. Bootleg cassettes and word-of-mouth still rule. It’s an inaccessible scene, but one completely over-flowing with creativity.

Whilst one could imagine that Egawa’s art was created in response to the music and culture around him, his pathway to art is actually far more personal. Having gone into cardiopulmonary arrest three times during an operation on his cardiac pacemaker - death has haunted him, stalking his waking moments, since that dramatic period in his life. His art is his own response, a conversation with the other side - the darkness, the emergence from the light - as autobiographical as it is fiction.

The artist himself considers his work to be memento mori pieces - a reminder of the inevitability of death. He might have made it through that time, but life shouldn’t be taken for granted in its wake. When he nearly died, in fact, he felt a oneness, a commonly described sensation of overwhelming peace, something many that have had a similar experience also speak of.

Utilising pencil on paper was simple and effective. In his hospital bed, it was almost all that he had. He didn’t need any devices, just the connection between the two and, by extension, the connection he feels with life itself. In that sense, despite the imagery common in metal, the language used by bands, he is not taken by the satanist or anti-christ lexicon, but by life itself.

Instead, it is the power that these images hold. In our lives, we recognise them, recognise what they mean. Throughout centuries, cultures may have evolved in unforeseen ways, but at their foundation, with the appreciation of many cultural concepts surrounding death, like Mexico’s famous Dia de Los Muertos, the iconography is the same. Stripped down from all cultural embellishments. There is purity in this expression.

An interest in death and the morbid reached its zenith in the hanging suicide of his influential step-father, a moment that crystallized many of the unanswerable questions that had been gestating in his teenage imagination and that, in some ways, he could make peace with in his own 'death'. Death was no longer a concept, but a practice. As real as every act of living. After his art, which carried with it this intense weight of experience, caught the eye, in 1999 of a Japanese death metal label, he was commissioned to do a cover for Colombian band Internal Suffering. It was here his career was born.

In 2014, tragedy struck again as he lost his wife to cancer. His response, as with his own near-death, was to push forward, to immerse himself in art and, through this process, to exist again in the infinite plane between life and death, where physical existence can be understood as something metaphysical or cosmic. It is here, in the most unique space in contemporary metal culture, that Egawa tells his story.

June 22, 2022
The Global Success of Attack on Titan
How a Japanese show rose through controversy to take over the world.
Edd Norval

June 20, 2022
With A Pencil In Hand - Connected By Lust
All is fair in love and lust.
Compulsive Contents