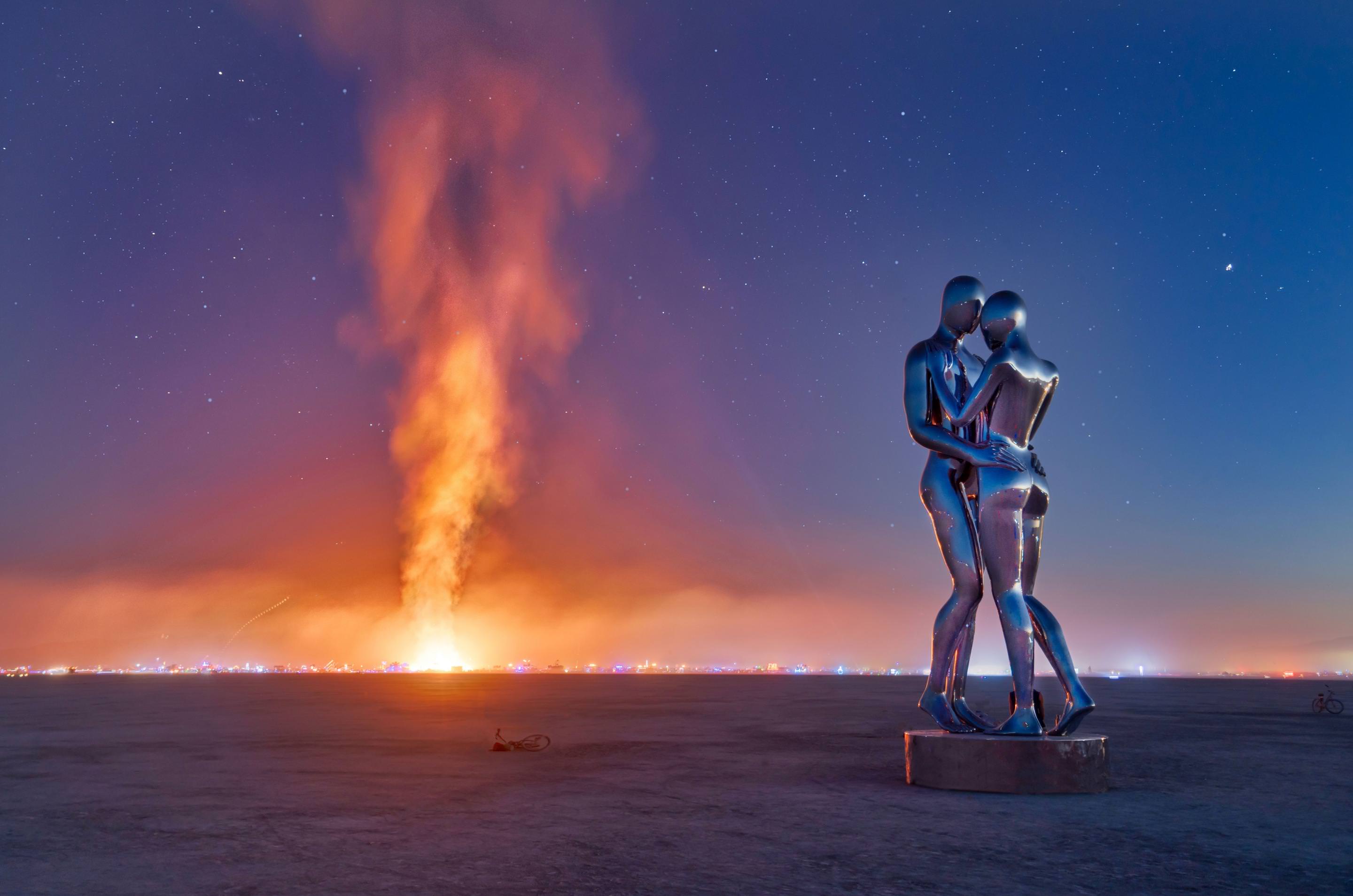 In the starkness of the Black Rock Desert, set against the washed out sands and the cascading blue-to-pink sky stands two of sculptor Michael Benisty’s polished steel figures embracing, supporting each other, reflecting everything that’s going on around them, contributing an ethereal aura to an already spectacular landscape.

Art, particularly sculpture, doesn’t become unforgettable due to what it is, but also where it is and how we look at it. What could be more dramatic than something vaguely digital, perfectly polished and entirely reflective towering amongst the vast plains of Black Rock City?

Benisty has twice contributed to the Burning Man festival with the suitably poetic titled pieces, In Every Lifetime I Will Find You and Broken but Together. Both pieces highlight the importance of connection, of support and of the life-affirming effects of moments shared with those you love the most.

They’re undoubtedly powerful in their starkness, far more gentle than monolithic steel sculptures should be. Testament to Benisty’s concept and execution, the sculptures seem to melt into the background of the desert as it dances with heat waves, before embracing the evening flames before gently casting them back onto the revellers. 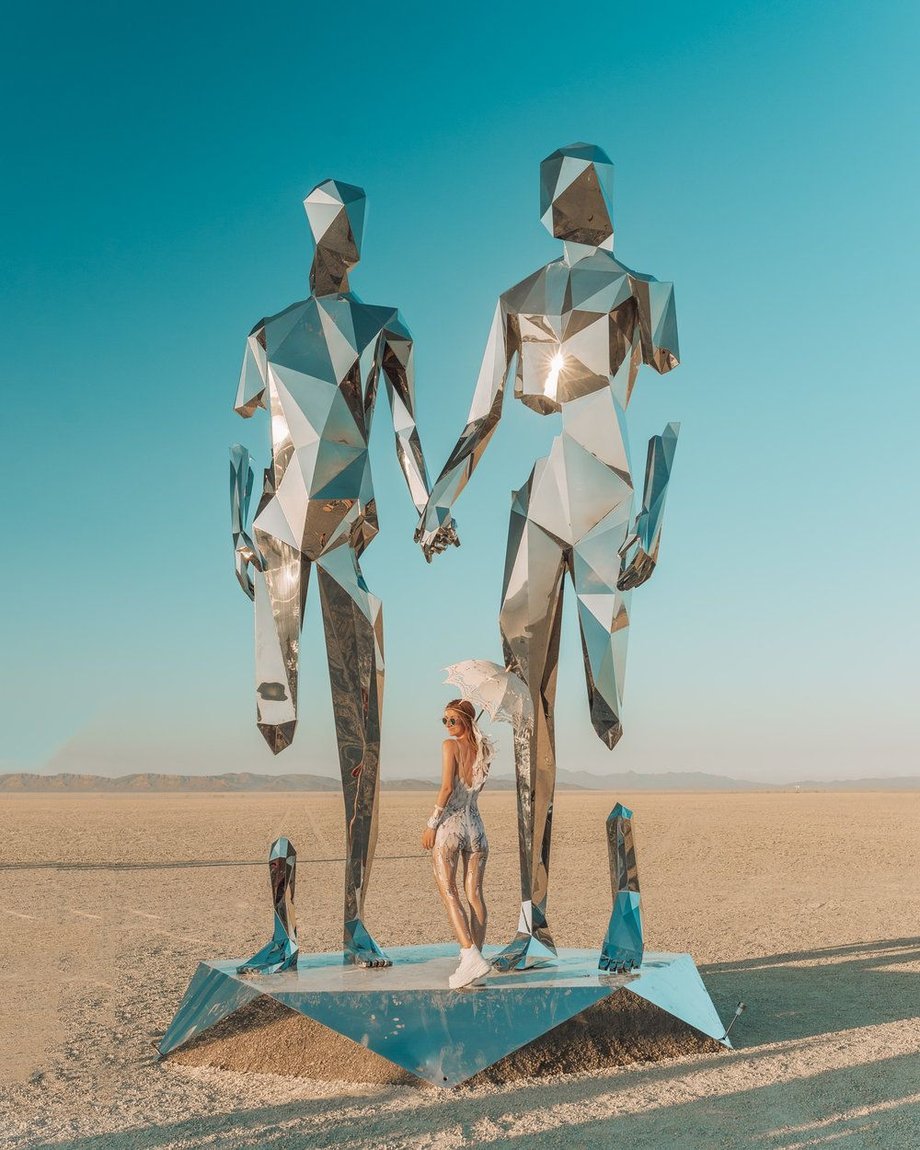 Although the sculptures don’t have eyes, it’s easy to imagine where they’d be ooking. In one of the pieces, the face of one burns a stare into the other’s, an intense embrace emblematic of the most wholehearted of loves. This makes sense at the festival, a place many describe as a completely alternate universe, where the currency is a barter system of gifts, favours, needs and trades, all dictated upon by the premise of empathy in a world that functions without greed.

In the other, Broken but Together, two figures stand hand-in-hand, a section of both of their outside legs missing, symbolising the physical support provided by the other. Whilst these sculptures are undoubtedly real, the influence of digital art - another practice Benisty is active in - is clear on his works. There’s something inherently unreal about them. It’s not just their otherworldly surroundings, but the emotionally led concepts behind them. 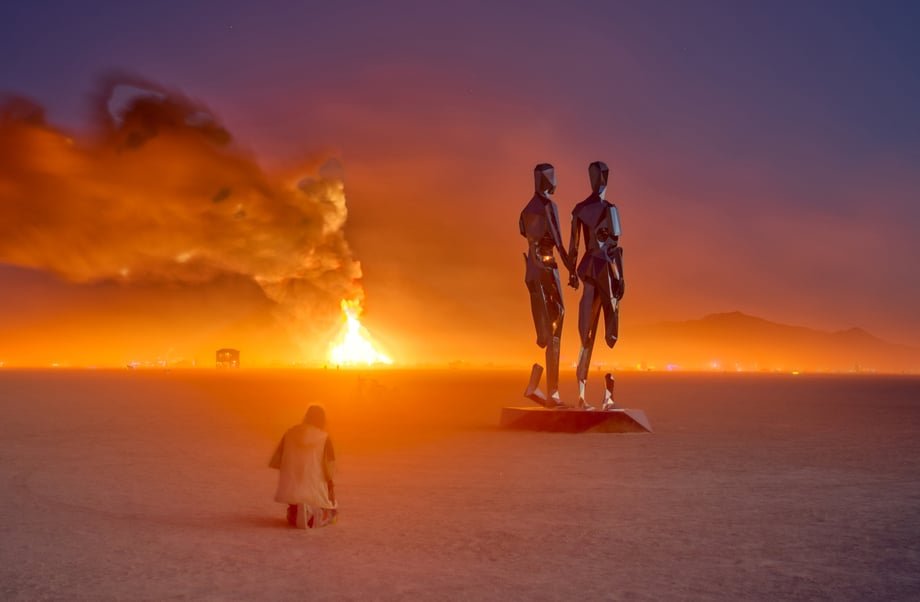 Benisty seeks to spread positive feelings through his art. He’s not wrong. They have a certain aura. They emanate something contagious to anybody who sees them. They’re love incarnate. His approach to art is about sharing, about the community. Purposefully led to spread transcendent messages of spirituality, the artist said:

This was my second installation at Black Rock City, bigger both physically and inspirationally. The whole process to bring this project to life was pretty intense due to the logistics of getting it to the desert, setting it up in the harsh elements, maintaining polished mirror. I spent an entire day driving around to find where they belonged. I wanted it to be a shimmer of silver that could barely be seen in the distance, but innately drew people to the piece. Was it a mirage? As people got closer they begin to feel, think, and breathe in the magic of them. These two figures together—are they dancing, are they kissing, are they protecting each other?

The psychological aspect is very important to the artist. Emotions may be physically enacted, but are experienced mentally first. That’s where his artistic process begins - mapping out what he wants to display. It’s also where the artistic process ‘ends’. Once his pieces are out in the wild, new emotions become attached to them as they're experienced by the audience. It’s this closed-loop, perpetual process of infinite experience - order and chaos, light and dark, life and death - that is so profoundly broached in Benisty’s pieces. 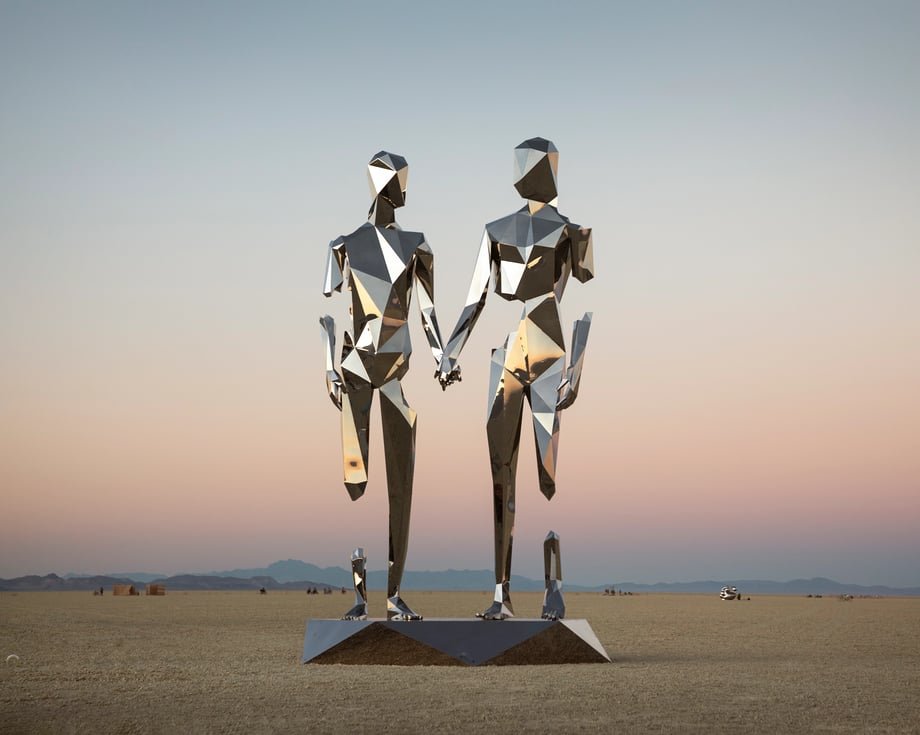 June 24, 2022
Disneylexya - Our Dreams Are Made of These
Spiritual muralism from Valencia.
Edd Norval