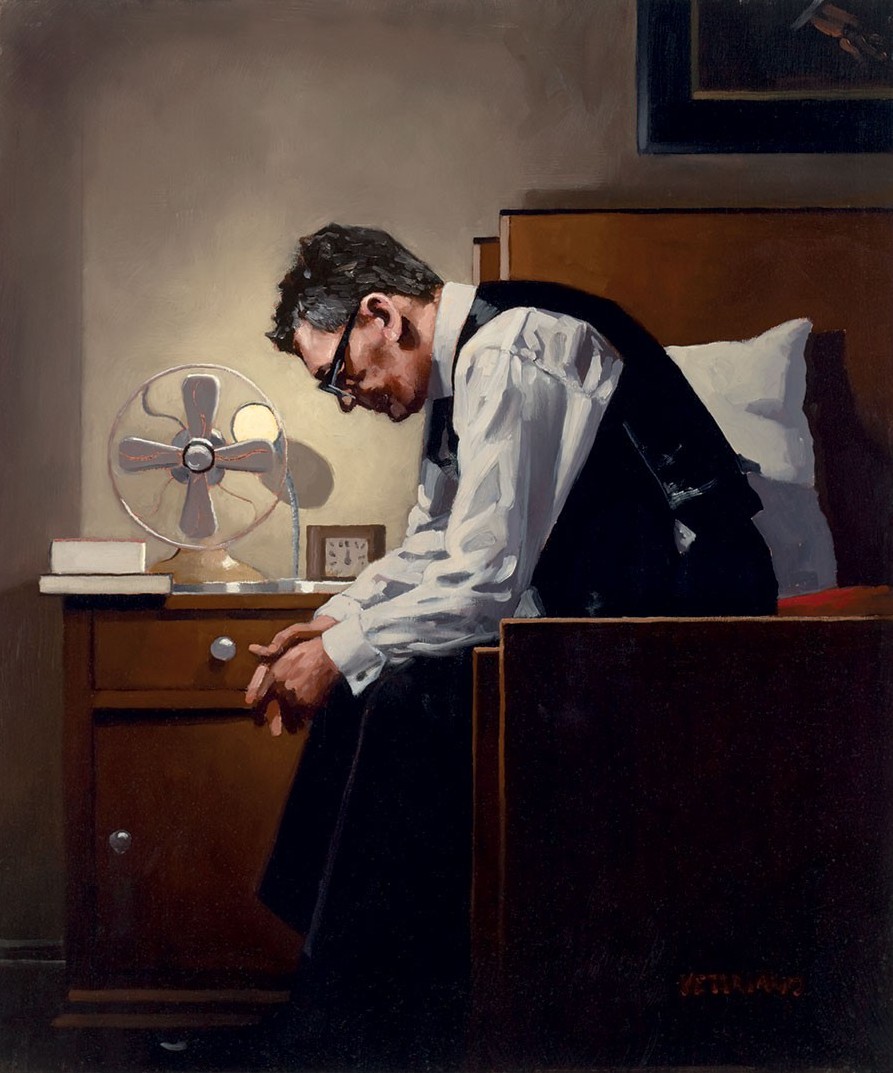 Jack Vettriano is one of the highest selling artists in the world - his paintings are uniquely his and can be seen all over the world. So whycan't the art world accept him?

Well to start with, Jack Vettriano paints the kind of paintings that are inoffensive, not necessitating scrupulous interrogation of theme - they hang on a wall and they look pretty. Isn't that what art is though? It's certainly one description of what it can be. The Guardian's art critic Jonathan Jones unfortunately disagrees though, saying that Vettriano "is not even an artist".

It highlights an interesting perspective on the maxim of those who can, do; those who can't, teach or sometimes criticise (art critics, music critics, restaurant critics). Glancing over the obvious pomposity of Jones' opinion on Vettriano, it highlights a more pervasive issue of elitism in the arts. If you're liked then you're in - you're one of us. If not, then sorry - try something else. 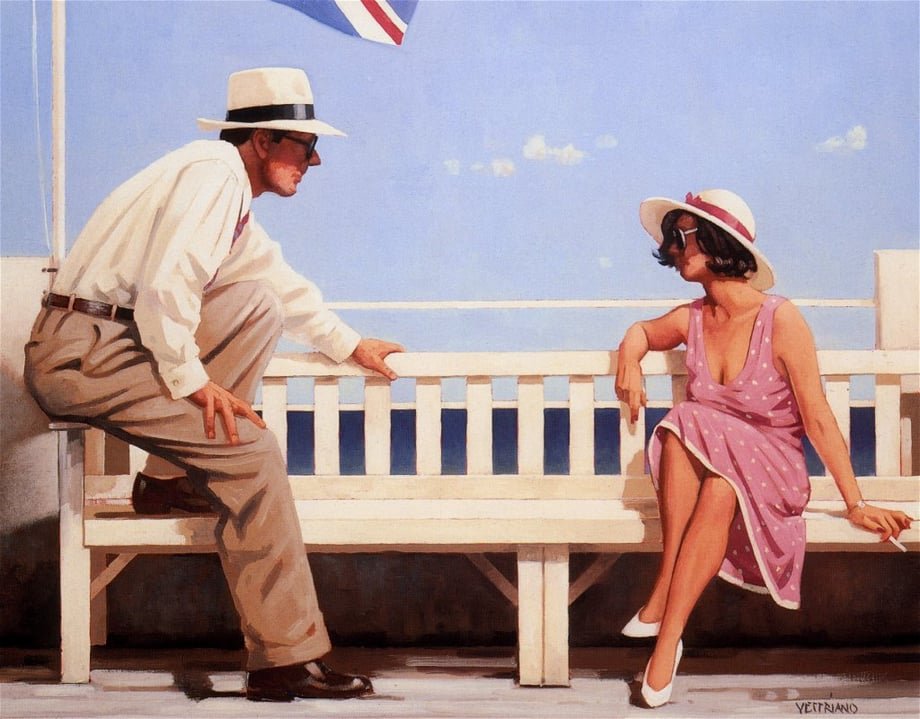 Jack Vettriano isn't going around telling everyone that he is the next Picasso though. He's not demanding that his work be held to any great acclaim or that it is making any profound statements about the nature of anything. He's just painting immensely popular artworks. It's art that the public lap up, they love it. Gallerists, critics, curators and those of similar ilk just don't like it though. Does this mean those that are essentially serving the public are actually grossly out of touch with it?

Let's not get ahead of ourselves. Vettriano's paintings feature scenes that are sexually charged moments, caught in a snapshot fitting of any 1950s noir film. Just like the pre-orgasm tension - he captures the electricity before it all ends - the moment before it all comes crashing down.

Most famous for the painting The Singing Butler, depicting a couple dancing in their sunday best on a tempestuous beach scene, guarded from the adverse conditions by their maid and butler. Couples are a common subject, always dressed in a way that we like to reminisce about. His men have the same appeal of Don Draper from Mad Men, the same can be said about the women. Silk gowns hang from their supple bodies as the men dominate the frame, standing stylishly attired in crisp white shirts held in place by braces. We love idealised representations of reality like this - hence his sales. So what do the upper-crust of the art-world have against it? 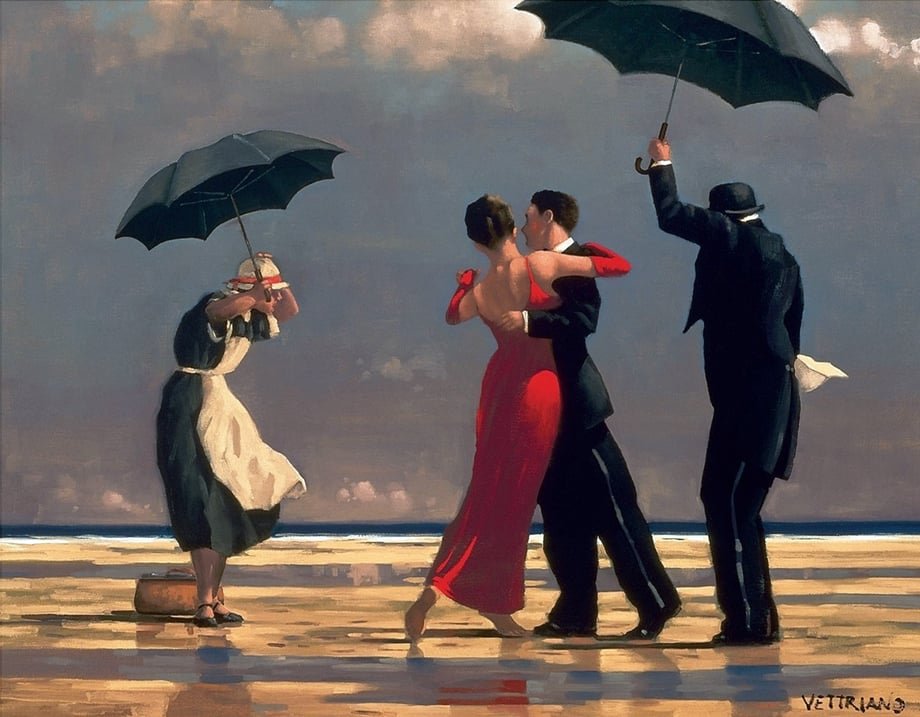 His work is reproduced in great numbers on t-shirts, mugs, keyrings etc. This proliferation is offensive to the culture, for art should only be for the few, not the many.

Vettriano believes that it is down to his choice to paint things that are aesthetically pleasing, eschewing the intellectualism that a lot of critics would prefer. By not tackling social issues or philosophical ones, he creates a democratised genre of art that has some high-profile collectors of its own. He can count Sir Alex Ferguson and Jack Nicholson amongst those - no fools you could say. Think about it though - these two men are actually mavericks in their field. Both known for not really giving a toss to what people think of them.

Maybe Vettriano's paintings are an attitude then? Their beauty is that they don't need to be talked about - looking is enough. They are painted beautifully, of that there is no question. They are sumptuous and intriguing - there's life before and after the moment was captured. It's this open-endedness that endears his work to the public - just like the sales of pulp novels of old. How did the man meet the woman? How did he manage to bring her home? What's going to happen next? We can only guess. 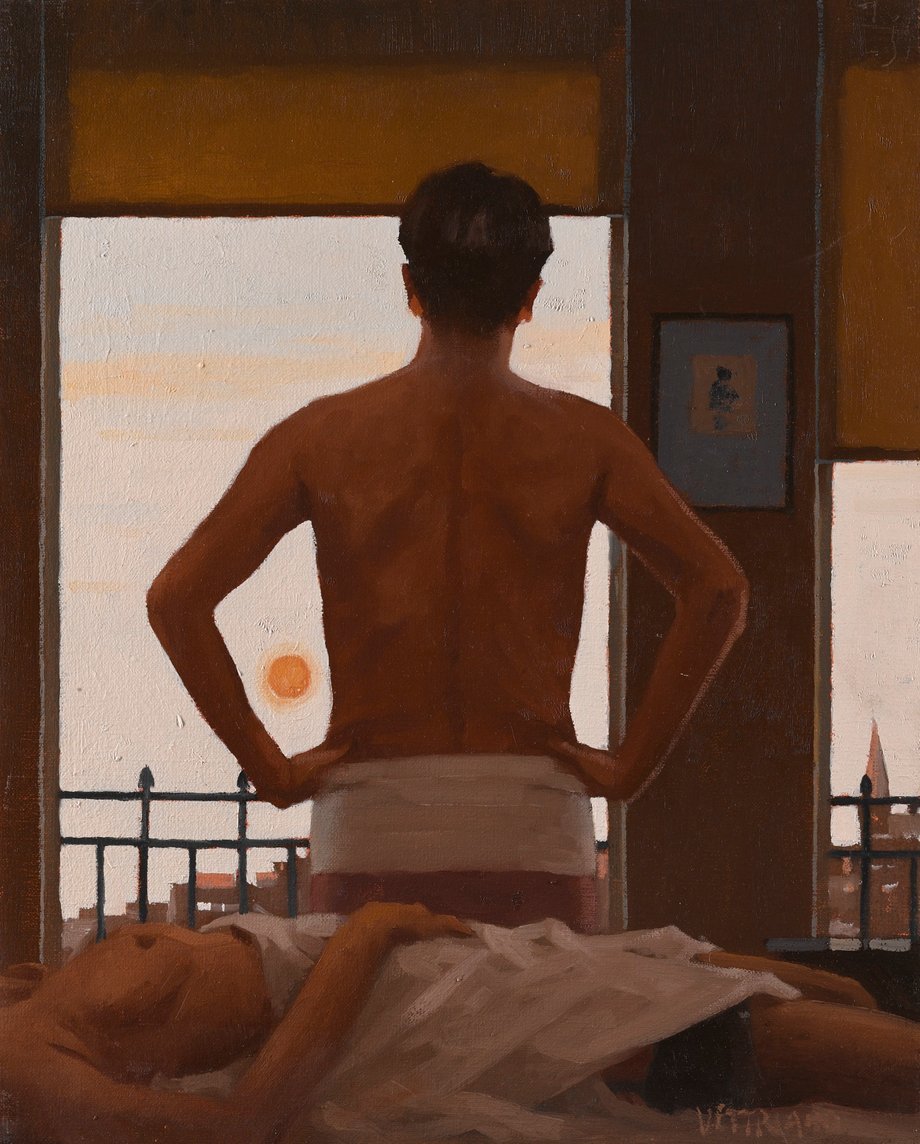 Undeniably, the attitude that exudes from his paintings is one of not caring about anything else - it's about being in the moment because there is literally nothing else around it. We feel like that too sometimes. It's actually something we long for - to feel so absorbed, so in love, so in lust by the person or people we are with that there is no life outside of it. Vettriano captures that in a frame and allows you to put it on your wall.

Jack was an art-school failure. He failed in that he never even got in. It's clear to see that a lot of artists make their name based almost entirely on the school they're from. No school was never going to help. Coming from a Scottish working-class background, he poured over the work of other artists at galleries, copying their style, obsessing over art books and trying to replicate his idols. Now the autodidact artist has sold paintings for £750,000. People don't like that. A guy from a mining town, unable to even get into art-school, now becoming a real artist - because whether or not critics agree, that's exactly what he is.

Unfortunately, the voracity that characterised his early years in paintings has began to subside. Although he admits that the criticism hasn't done it alone, it has taken the early romance out of the creating process. Luckily for the public, they still have the joy of his earlier paintings and no amount of bad criticism will wipe them off the face of the earth, no matter how much some people would like that.

The other attitude that he evokes is in his collectors and in fact anyone that has his art. The working-classes don't like being told what to like, especially by middle-class critics that haven't created anything nearly as beautiful in their life. Having a Vettriano on your wall is a 'fuck you' to their sanctimonious worldview - the people who adorn their walls with his paintings are comfortable in their skin, they have nothing to prove and most importantly - they aren't afraid to dream, because sometimes a dream is all they have. 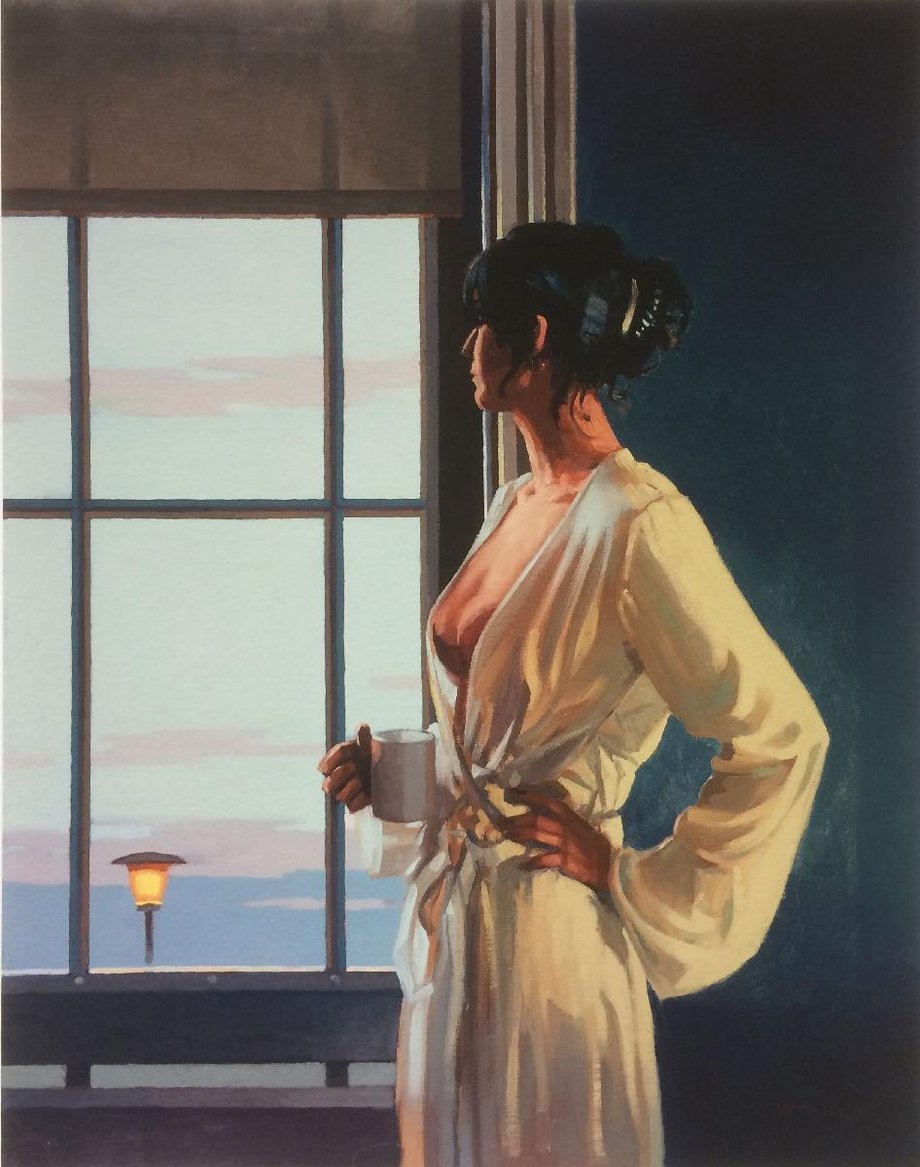 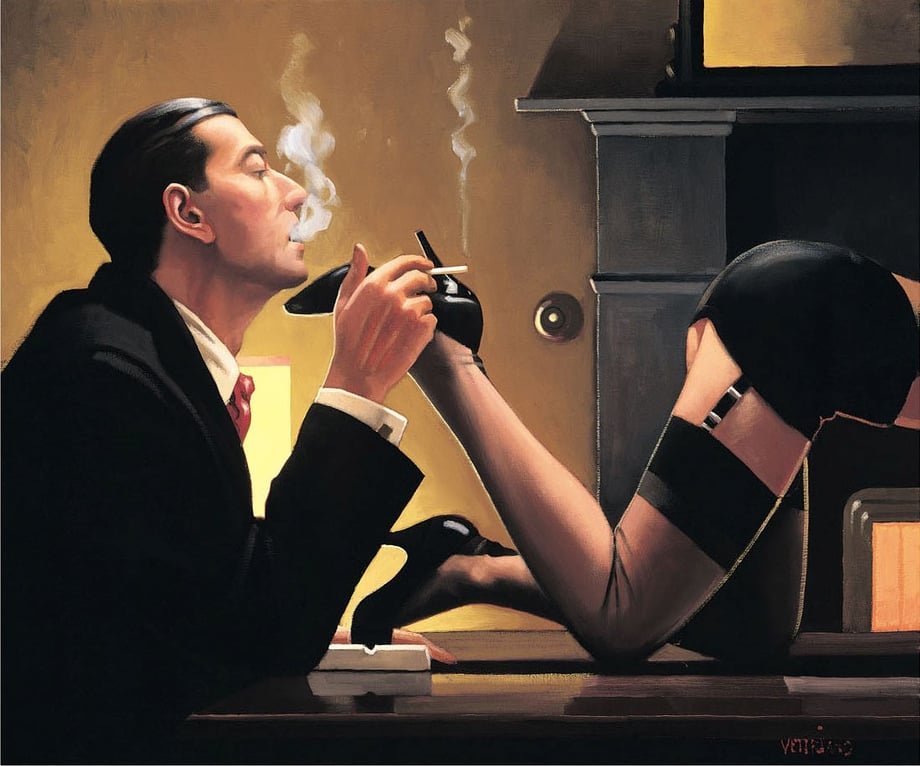 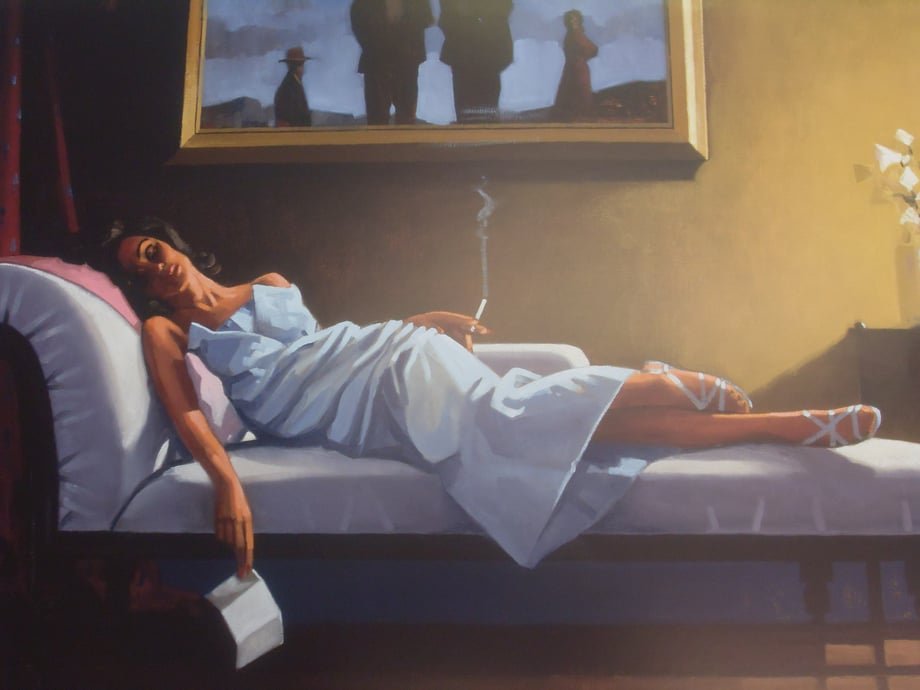 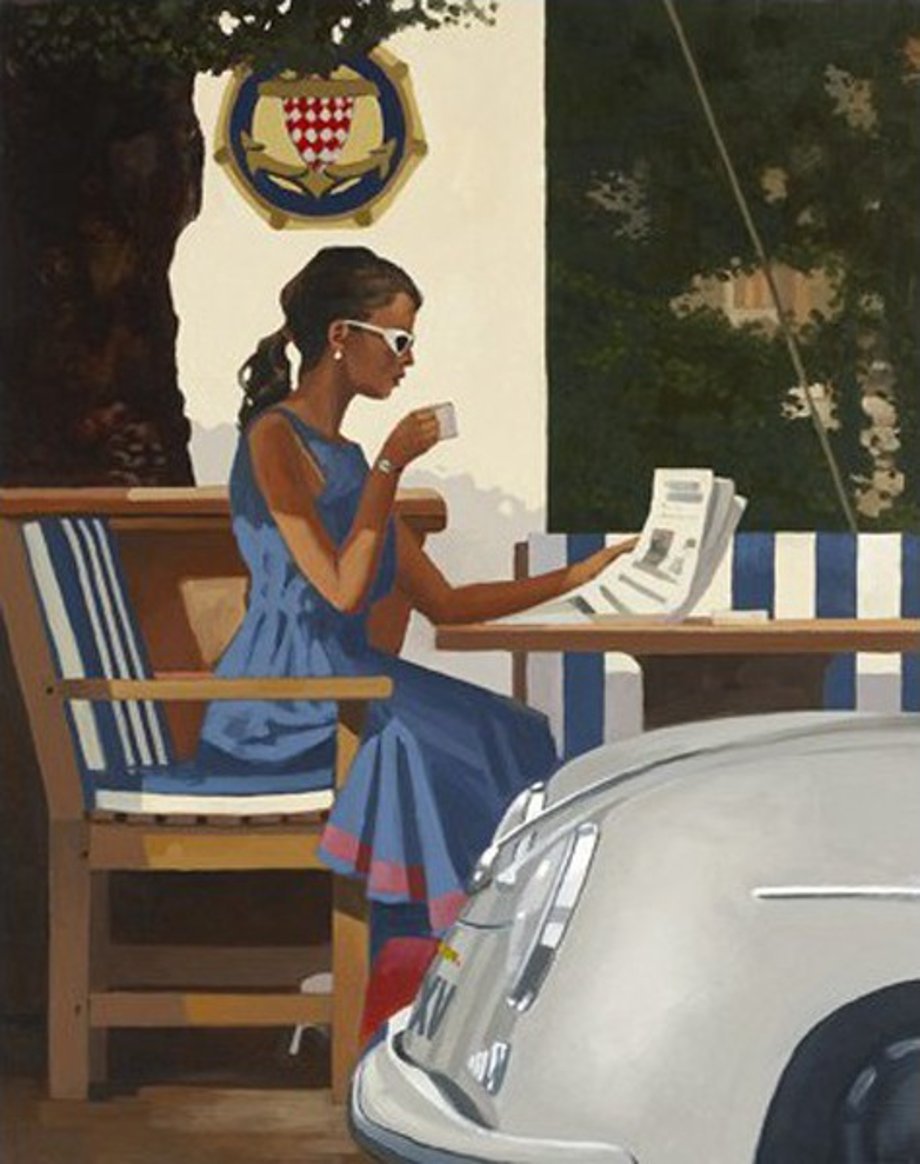 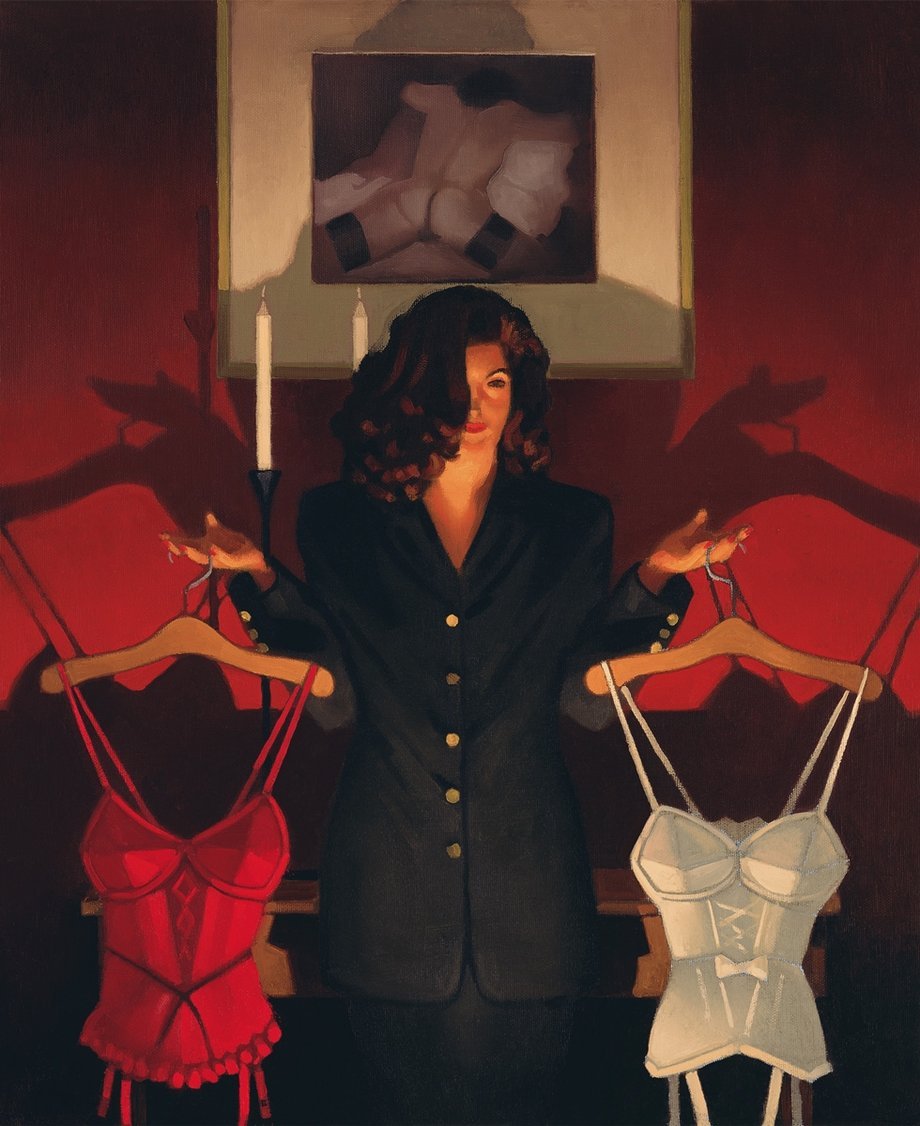 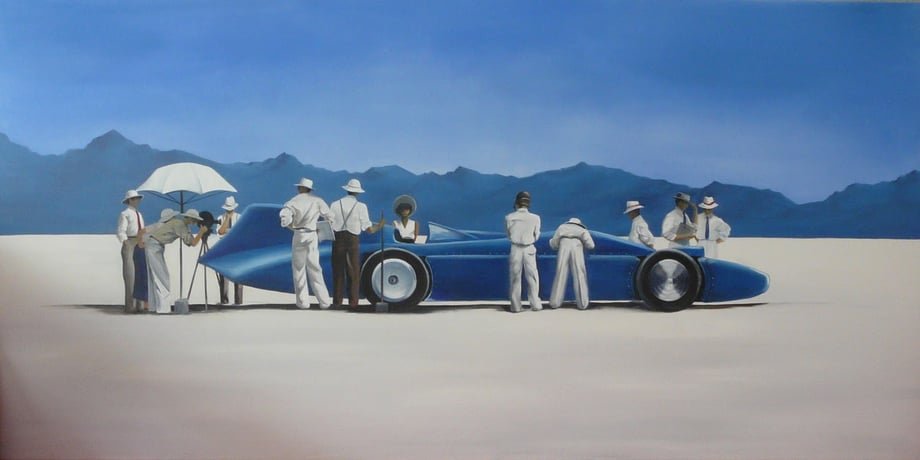